Breast cancer is the most common form of cancer in women worldwide with an estimated 1.7 million new diagnoses each year, according to the Breast Cancer Research Foundation. A global health emergency, it’s that much more acute in developing countries where the majority of cases are identified in late stages. Which is why a new weapon in prevention is causing a global fervor. Known as iBreastExam, the FDA-cleared wireless handheld device can detect tumor tissue using new tactile sensing technology in under five minutes without causing pain or emitting harmful radiation.

As highlighted by The New York Times, the revolutionary tool is the brainchild of computer engineer and developer Mihir Shah, who recognized a dire need for early detection in India, where for every two women newly diagnosed with breast cancer, one will die. There, and in other developing nations across the world, the lack of access to early detection often comes down to the dearth of mammograms (attributed to their high cost) and a shortage of trained radiologists. And while incorporating iBreastExam technology into routine checkups globally could help the medical community zero in on the women that need it most, it could also play a pivotal role in early detection for countries at the forefront of breast cancer research, like the United States.

While Ari D. Brooks, M.D. and director of the Integrated Breast Center at Pennsylvania Hospital, underlines that the iBreastExam isn’t meant to replace or compete with mammograms, which remain the standard of care in the field, he acknowledges that it could serve as a more thorough precautionary measure in routine physical exams for women of all ages, especially those under 40 who are not eligible for screening. “If placed in primary care and ob-gyn offices, it could help document and augment the physician’s exam of a patient’s breast,” he explains, adding that it might also identify more women with findings worth sending on for mammogram and ultrasound evaluation. Additionally, this technology may help women and their doctors feel more comfortable during in-office breast exams. “Many women feel [lumps, but] they aren’t comfortable with their own self-exam,” explains Dr. Brooks. “Using the iBreastExam in the doctor’s office may help them feel confident that they do or do not feel something.”

And while Dr. Brooks acknowledges that on the flip side, it’s possible iBreastExam could lead to more “false alarms,” that is, use of ultrasound and biopsies for evaluation of benign conditions, he also cities the importance of a 2016 study published by the World Journal of Surgical Oncology, which concluded that the the tool demonstrated excellent sensitivity when identifying significant lesions that warranted further evaluation with diagnostic imaging. 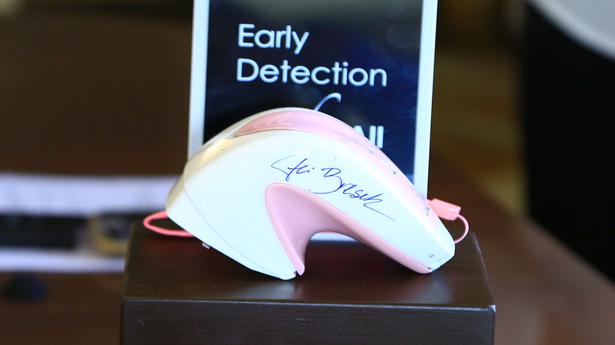 Whether or not the iBreastExam becomes a doctor’s-office mainstay or not, there’s no denying that the technology is already having a significant impact in the fight against breast cancer, not just by making early detection easier for those who need it most, but by creating more awareness in how women can be more proactive in lowering their risk—and offering one more tool in the fight against this crucial disease.

This article was originally posted on Vogue